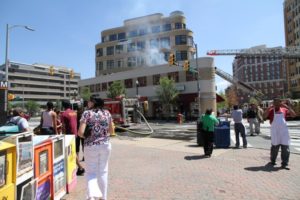 Clarendon’s Delhi Club restaurant (1135 N. Highland Street) is back open after a kitchen fire forced it to close in June.

Delhi Club first opened its doors Friday night, for dinner, according to manager Mir Hussain. The restaurant has been attracting sizable crowds ever since the reopening, he added.

“Business is good,” a relieved but busy Hussain said during today’s lunch service. “We opened on Friday and Friday was very busy.”

Delhi Club originally had hoped to open a week after the fire, but only recently received the last of the county permits required to reopen.