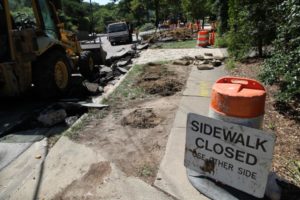 The slip lane from Arlington Ridge Road to Meade Street — the primary focus of a neighborhood fight over a pedestrian safety improvement project — is no more.

In addition to the work in progress — eliminating the Meade Street slip lane and making the intersection a purely 90 degree turn — the $200,000 county project has already turned the bus pull-off lane south of 23rd Street into an expanded sidewalk and has squared up the intersection of Arlington Ridge and Oakcrest Road by extending the permanent curbing to where a temporary curb had been installed.

Save Our Streets, a group that formed to oppose the construction, says the money could have been better spent.

“We all watch with a sense of disbelief. Why would the County waste this much money for fixing a non-issue with Meade Street intersection which has no reported accidents?” the group said on its blog. “We need this money for our schools, our poor, our libraries, our roads… not on projects that go way beyond what people want.”