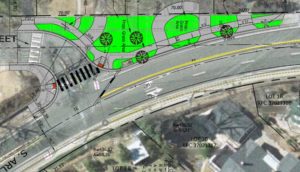 (Updated at 12:20 p.m.) Next week, construction is expected to begin on a number of controversial changes to Arlington Ridge Road from 23rd Street to Meade Street.

The four-week, $200,000+ construction project will eliminate a bus pull-off lane, will extend permanent curbing at the intersection of Arlington Ridge and Oakcrest Road, and will include various curb, gutter and sidewalk improvements — all in the name of improving pedestrian safety.

But one change in particular has prompted vocal protests from dozens of residents: the elimination of the slip lane from southbound Arlington Ridge Road to S. Meade Street.

The slip lane is used by residents who live in the neighborhood, and by parents dropping their children off at Oakridge Elementary School. Critics of the project — who are publishing a blog called Save Our Streets — say that eliminating the slip lane will actually make the area less safe by forcing turning traffic to stop on a steep downhill portion of Arlington Ridge Road, risking rear end collisions and making the sharp turn difficult during bad weather. 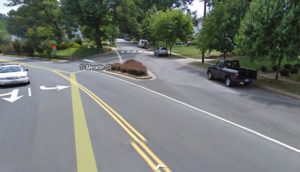 In response to a letter from the Arlington Ridge Civic Association (ARCA), which said the S. Meade Street portion of the project “is viewed as unneeded and potentially dangerous… with little or no gain for pedestrians,” county staff wrote that the elimination of the slip lane is “a major component of the project plan.”

“The existing slip lane allows vehicles to exit Arlington Ridge and enter S. Meade Street at a higher rate of speed,” staff said. “Requiring vehicles to slow to a safe maneuvering speed at the proposed singular entry site improves the safety for vehicles, bicyclists and pedestrians… The necessary reduction in speed for turning vehicles under the proposed plan is also supported by the current [25 mph] speed limit on Arlington Ridge, the lowering of which was heavily supported by ARCA.”

Arlington County Director of Transportation Dennis Leach reiterated that view in a recent WUSA9 story on the Arlington Ridge changes.

The plan to turn the slip lane into an expanded sidewalk and green space is consistent with other county road projects that have eliminated slip lanes, including at the intersections of N. George Mason Drive and N. Frederick Street and S. Joyce Street and 15th Street. Another slip lane — at the bottom of a steep hill on S. Walter Reed Drive at the Four Mile Run access road — is also slated for removal this summer, and at least two slip lanes at Glebe Road and Fairfax Drive are slated for elimination in the next year or two.