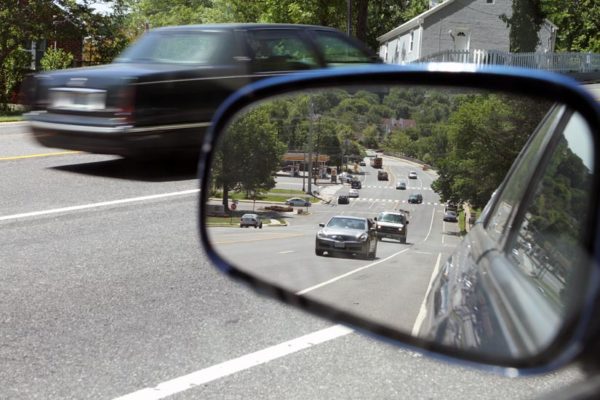 Changes are coming to the steep stretch of Walter Reed Drive where a bicyclist was killed over the weekend.

Arlington County plans to begin work this summer to add a number of safety improvements to Walter Reed between S. Pollard Street and Four Mile Run Drive. The changes, which were in the works before the accident, include:

The 45-60 day construction project will also eliminate the right turn lane from southbound Walter Reed Drive to the Four Mile Run Drive access road. (The bicyclist, who had been heading downhill on Walter Reed Drive, struck a car heading east on the access road just after the turn lane, according to police.) 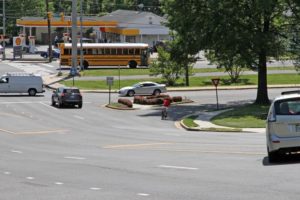 Arlington Traffic Engineering and Operations Chief Wayne Wentz says that eliminating the turn lane and replacing it with landscaping will help slow down cars — which will now have to make a 90 degree right run at the intersection — and will make it easier for pedestrians to cross.

“People treat [such lanes] very much like ramps rather than just intersections,” Wentz said. “It just reinforces that you’re turning onto a neighborhood street, not on to some major arterial.”

Wentz said the overall goal of the project — which he says will cost about $180,000 — is to reduce the number of potential “conflict points” between pedestrians and vehicles. The project, he said, will not explicitly attempt to reduce the speed of cars or bicycles heading downhill on Walter Reed Drive.

The travel lanes on Walter Reed Drive will not be narrowed, Wentz said. The county also has no plans to add a speed limit sign to the downhill lane, even though the nearest speed limit sign for southbound drivers is at 19th Street, well before the hill. 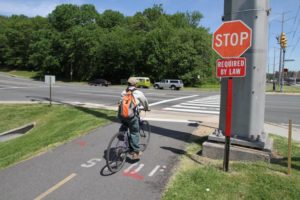 One critic of the Walter Reed project, civic gadfly and development opponent Jim Hurysz, said that was a mistake.

“Why would [Arlington County] not want to install more speed limit signs on a steep hill?” he asked.

“It’s not extraordinarily steep,” Wentz said of the hill. “It’s pretty easy to know that that’s a hill, both for a car or for a bicyclist… We had no plans as part of this project to do any reinforcing of that.”

Hurysz also questioned the wisdom of spending funds on Walter Reed Drive when a number of nearby neighborhood streets were in “poor condition.”