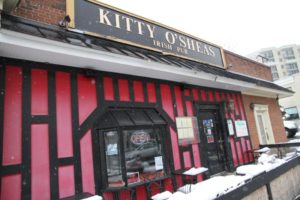 Kitty O’Shea’s, the unpretentious Irish pub at 2403 Wilson Boulevard in Courthouse, will be closing this weekend, according to a note on the pub’s web site.

“Saturday, August 27, is our last day of operation,” the note says. “Feel free to express your displeasure with Schupp Companies – Park Street Development.”

Kitty O’Shea’s owner Danny McFadden has been engaged in a costly legal battle with his landlord, the Schupp Companies, over what McFadden says is an attempt to evict him so the property can be redeveloped. McFadden claims that he still has four more years on his lease, while landlord Ray Schupp says the lease ended in 2010.

“He’s been trying to force me out,” McFadden said in an interview last week. “I’ve spent hundreds of thousands fighting this case… I guess they think that I’m going to go away, that when my money runs out I’m going to close shop. As far as I’m concerned, my lease runs to 2015.” 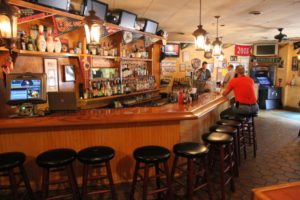 When we talked last week, McFadden said he was appealing a court decision against him to the Virginia Supreme Court, with the hope that it would give him some additional time to look for a new space to lease in Arlington. Now, he says he’s being forced to move out despite the appeal. McFadden is considering transferring his employees to Murphy’s Law, a pub he owns in the Tenleytown neighborhood of D.C., while the appeal goes through the court system over the next 4-5 months.

Last year the state Supreme Court ruled against McFadden in his effort to appeal his eviction. McFadden said he was seeking a trial by a jury, but instead has been subject to early rulings by judges.

“I’ve asked for jury trials, I haven’t had a day in court,” he said. “Every case is a summary judgment for the landlord.”

It’s not clear what will replace Kitty O’Shea’s at this point. The entire block is currently subject to a rezoning request, which would convert it from a low-rise commercial zone to a higher density mixed-use residential zone. An earlier attempt by Schupp to rezone the block for use as a hotel was shot down in 2009.

County staff have voiced support for the current rezoning proposal, which would likely result in a new apartment complex being built on the site. But Schupp says that it could be 2-5 years before the necessary rezoning, financing and permitting process go through. In the meantime, he’s looking for a new business to lease the space on a short-term basis.

“We’re working with several concepts now,” he said. “We have nothing firmed up and no lease signed right now.”

In January, we reported that Schupp’s company had applied for a liquor license for “Wilson Tavern,” a potential replacement for Kitty O’Shea’s.

We asked McFadden if the legal fight has been worth it, whether it would have just been easier to give in early on and seek a new lease somewhere else.

“Looking back, probably not,” McFadden said. “But if every small guy rolls over, then every landlord is going to do the exact same time.”

“I’ve been honest with everybody,” McFadden continued, in his thick Irish accent. “I’ve paid my bills, my taxes are paid… All I want is justice.”

As for the fate of Kitty O’Shea’s, McFadden says he will continue looking for a suitable space in which to re-open in Arlington, should his appeal fail to all him to move back in to the old location.