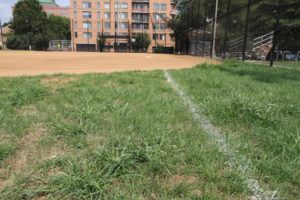 A group of parents are threatening to file a Title IX complaint against Arlington Public Schools for what they say are inadequate and inequitable facilities for the Washington-Lee High School girl’s softball team.

Parents say the team’s field — located in the public Quincy Park, near Arlington Central Library — is not regulation size, is in poor condition and is frequently befouled by dogs and homeless persons. Parents are demanding better facilities — at least in line with the baseball team’s field, also located in Quincy Park — or else they may file a formal discrimination complaint with the U.S. Department of Education’s Office for Civil Rights.

While the W-L boys baseball team utilizes a regulation-size field, parents say, the softball team must make use of a field designed for and used by adult men’s slow pitch softball games.

“The dimensions of the skinned slow pitch infield are too large for fast pitch softball,” parents wrote in a letter to school officials. “The outfield fences are about 100 feet too deep.”

Also, parents say, the softball field lacks a press box, a PA system, a pitcher warm-up area, a flag pole (for the Pledge of Allegiance) and adequate bleachers — all of which the baseball field has. 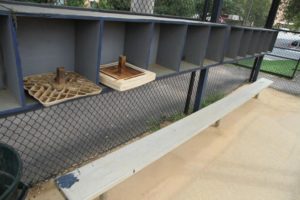 The field itself is rutted and in such poor condition that it “represents a hazard for the girls who must play there,” the letter continued.

“The softball infield, unlike baseball, is rock hard and drains poorly,” parents say.

“Unlike the baseball field, which is covered in the off-season for maintenance and more consistently maintained during the season, the softball field is never covered, the outfield grass is mowed infrequently… and the infield often is improperly lined for high school competition on game days,” the letter said. “Umpires this spring threatened on at least one occasion not to allow games to be played for this reason.”

Additionally, parents cited various security concerns, like the half-mile walk from the high school and the lack of security lighting or an emergency call box.

“On at least one occasion in 2011 when the varsity team returned home after an away game to use the storage facility in a dark area… girls were surprised by a homeless person sleeping near the storage shed,” parents wrote. 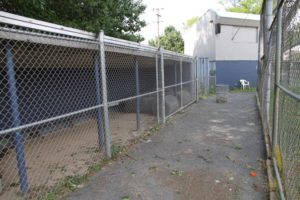 Parents say that homeless individuals frequently sleep in the dugouts, which cannot be locked, unlike the boy’s baseball dugouts (pictured, left). “Drug paraphernalia” was found in one of the unlocked batting cages this spring, they added, noting that they’ve been told the cages cannot be locked because Quincy is a public park.

Further, “the unsecured softball field at Quincy is used as a dog park; the presence of animal waste on the field (often tracked into the dugout) represents a public health hazard,” parents wrote.

Yesterday the school system asked the group for another two weeks to respond to their letter, which was sent on Aug. 13, according to parent Christopher Prins. The letter was sent after months of dialogue between parents and school administrators.

“If we don’t hear back by Sept. 9, with something substantive that advances this discussion, then we will move forward,” Prins said. “We don’t like being blown off for essentially five months.”

Assistant Superintendent Meg Tuccillo says the school system has “limited green space” in which to accommodate student sports, but they nonetheless “intend to work with the families.”

“All I can tell you right now is that we are in communication with parents about their concerns,” Tuccillo told ARLnow.com in a brief phone conversation. “We’re actively looking into the matter.”

Prins said the parents have a good relationship with Arlington County, which oversees Quincy Park, but they expect the school system to provide better facilities. Ideally, they say they’d like a practice field on the Washington-Lee grounds to be converted into a new softball field.

If the team has to stay at Quincy Park, Prins cited Greenbrier Park, near Yorktown High School, as an example of a clean, modern baseball and softball facility within a public park. Parents requested that the W-L girls play there temporarily, Prins said, but they were turned down by school officials.

Despite the additional amenities, Prins acknowledged that the baseball field at Quincy Park suffers from its own set of problems.

“I’m certainly not suggesting the boy’s facility at Quincy Park is a model facility either,” he said.

The girl’s softball team plays in the spring. A blog was set up earlier this year to advocate for better softball facilities.