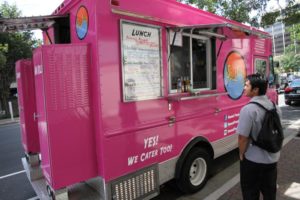 It wasn’t the easiest decision for Anna and J.P. Goree — leaving their jobs at a Fairfax County Whole Foods and launching their very own food truck. But Anna, who had dabbled in the catering business while still at Whole Foods, knew it was something she wanted to do. Three weeks after their “Seoul Food” truck first started offering Korean cuisine to Arlington lunch-goers, it’s looking like a good decision.

“It’s too good to be true,” she said of the lines that formed outside the truck while it was parked in Rosslyn last week. “It’s amazing.”

The Gorees, along with their one full-time employee, were serving between 200 and 250 customers a day last week. By 1:30 p.m., most of the menu was sold out. And that was perfectly okay with Anna.

It’s a “sinful thing” to throw away perfectly good kimchi rolls, kalbi burritos and bibimbap bowls, she said. And she refuses to sell day-old food. 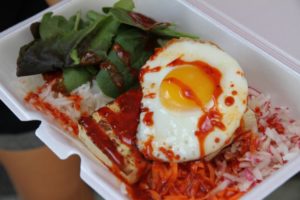 Anna says she’s happy to be in Arlington, serving daytime crowds in Crystal City, Courthouse, Rosslyn, Ballston and — soon — Virginia Square. Business is so good, however, that Anna says they’re already thinking about launching a second truck in D.C. next year. While admitting that “D.C. is very saturated with many food trucks,” Anna says that her Korean cuisine is unique enough, and the ingredients (many of which are purchased from Whole Foods) fresh enough, that she’s not worried about the competition.

Anna only has to look at their own truck to realize the treacherous nature of the mobile business, though. The truck used to belong to the BBQ Bandidos, whose sammys and cemitas attracted crowds in Arlington, but who decided in the end that it wasn’t worth the effort. The Bandidos, Anna said, have returned to their old gigs in the catering and music businesses.

Luckily, the Gorees have a plan to increase sales.

To keep customers coming back, Anna and J.P. — a pastry chef and a meat carver, respectively — are planning on adding to their menu. Soon, the Seoul Food truck will be offering duck rolls, Korean nachos with kimchi and green onions, bacon kimchi quesadillas and kimchi bacon fried rice. Homemade miso and udon soups will be added to the menu this winter.

To boost sales beyond the lunchtime crowd, the Seoul Food truck is available for catering to private clients. It also makes appearances out DC United soccer games.

And while Anna says she’s “shocked” by the number of people in the area who are already familiar with Korean cuisine, she’s actively trying to make customers out of kimchi newbies. Just ask and you’ll receive a free sample, she said.