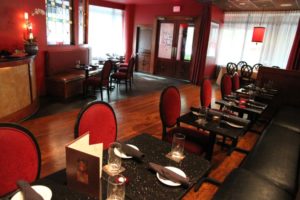 Willow Restaurant in Ballston is expanding — but without expanding its size.

Nosh introduces bistro-style dining as a half-way point between Willow’s white tablecloth main dining room and its less formal and less extensive bar menu. Nosh is located near the restaurant entrance, in a space that was previously “underutilized” as a lounge-y waiting area.

“Set amidst stained glass windows and gleaming black granite tables in Willow’s main vestibule, Nosh will offer a constantly changing roster of small and large dishes fit to carry the Willow name,” according to the restaurant. “No reservations are needed at Nosh, making it the perfect spot to drop by whether you are already in the neighborhood or venturing out from afar.” 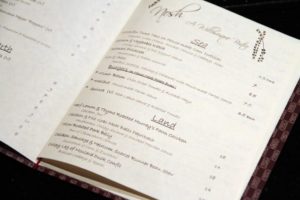 Chef and co-owner Tracy O’Grady says that one thing that will set Nosh’s menu apart from other local bistro-style dining establishments is the use of vegetables. While others may emphasize combinations of meats, cheeses and frites, Nosh takes a more balanced approach. For instance, a flavorful chicken sausage is served with a heirloom scarlet runner bean stew and a succotash of corn and zucchini. And while the slow-roasted pork belly may not come with veggies, its offset by veggie-only dishes like the spicy stewed chick peas and kale.

“A far cry from common pub fare, the Nosh menu will feature a wide variety of vegetarian and fresh fish options along with dishes to satisfy any conscientious carnivore,” the restaurant says.

Between Nosh and the main dining room is the new bakery counter, Kate at Willow. Pastry chef Kate Jansen is responsible for the bakery, which will offer its “high-end and beautiful” cookies, cupcakes, bars, brownies, tarts and cakes to walk-in retail customers. Many of the goodies will also be available as desserts to Willow diners. 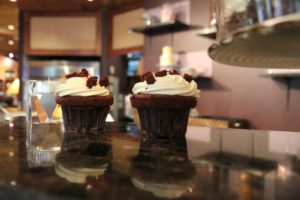 Most of the items on the bakery menu were not previously offered in the restaurant. Among the offerings are sticky toffee pudding cake, s’mores sandwich cookies, ginger scones, pineapple upside-down cupcakes, key lime tarts, and red velvet cakes.

O’Grady says that Nosh and Kate were conceived earlier this year with all customers in mind, but she’s especially hoping to attract a neighborhood crowd with the new offerings — not just Ballston’s workday professional crowd.

“We need to service the neighbors too, the people who live here,” she said. “It’s been an evolution for us… As the neighborhood grows, we’re growing with it.”