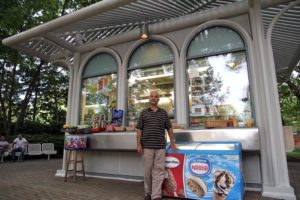 If you’ve ever met Ishak, you probably know him as a hard-working guy who greets customers with an easy smile. What you probably don’t know about the guy serving you snacks and sodas is that not too long ago he was a prominent attorney in Egypt, with a large office and business before the Egyptian Supreme Court.

Ishak moved his wife and twin daughters to the United States five years ago, he says, after they started fearing for their safety. Being a Christian in Egypt, as they were, had become too dangerous, says Ishak.

“Over there, anybody can hurt you at any time,” he said. 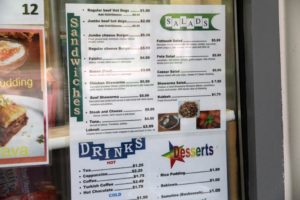 In the U.S., Ishak has traded his large office for safety and a much different career path. When he’s not running the concession stand (in the Crystal City Water Park, across from 1750 Crystal Drive) Ishak is working as a part-time salesman for a JCPenney store in Fairfax. He could be doing more, Ishak says, but his poor English limits his job opportunities. In the coming months or years, he’s hoping to remedy that.

Ishak has been gradually adding new and higher-quality items to the menu at the concession stand. Although the stand isn’t making him rich, he says business is “good” and getting better.

“I don’t worry about money, because when I work hard, money comes,” he said.

For Ishak, business is personal. The recipes for many of the menu items, like the smoothies and the fattoush salad, are customized by Ishak to meet his own personal standards. For instance, the mango smoothie contains real mango pieces, as opposed to flavored syrup. (“It’s expensive but it’s good,”  he says.)

Plus, Ishak makes a point to provide personalized service. He’ll memorize what regular customers usually order, and will offer to let customers pay him back if they left their money at home.

“I think of every customer like a friend now,” he says.

Under Ishak’s contract with the property owner, the concession stand remains open daily from April 1 to the end of October, usually from 10:00 a.m. to 8:00 p.m. Ishak says the stand may stay open for part of November, if the weather cooperates.

In the future, Ishak says he hopes to open another store in Arlington, which he praises as being full of “good people.”