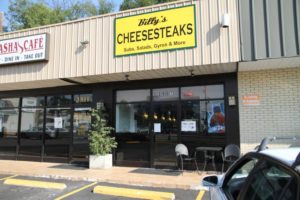 The restaurant replaces the four-year-old Cherrydale Deli, but remains under the same ownership. Though some of the same deli items remain on the menu, Billy’s will focus specifically on — you guessed it — cheesesteaks.

Customers can substitute chicken in any of the cheesesteaks, and a vegetarian option will be coming soon, according to Hamrock. Other offerings at Billy’s range from homemade pizzas, sandwiches, pitas, subs, sides, salads and chili.

Next week, Billy’s will be open for breakfast, lunch and dinner, Hamrock said. Also coming soon: a delivery service for Billy’s and the next-door Mediterranean restaurant Pasha Cafe, which Hamrock also owns.