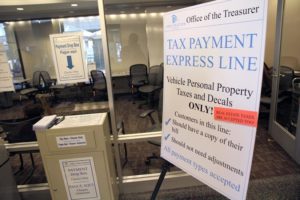 The expected rush of residents paying their county taxes at the last minute didn’t happen as originally thought. County Treasurer Frank O’Leary predicted around 2,600 people would show up on Wednesday to pay their vehicle personal property tax and installment two of the county’s real estate tax in person, but the number was actually 2,201.

That day alone brought in almost $6.5 million for the county, making the total amount collected from walk-ins during the final week $30.7 million. Compare that with 2009, when 2,799 people showed up on the final day and paid nearly $11.8 million, with the final week totaling $35.8 million.

O’Leary notes that printing trouble last year caused the tax bills to be sent out 10 days late, so the deadline was extended by 10 days, to October 15. That made comparisons to 2010 invalid so 2009 numbers are used for comparisons instead. The 2009 numbers were also adjusted to take into consideration the new technology system this year.

He said, “My promise that no customer would wait more than six minutes for service was easily fulfilled.”

Overall, the number of people choosing to pay in person has declined by more than 1,200 people, or nearly 17%, since 2009. O’Leary also noticed that immigrants, who make up the majority of walk-in payments on the due date, didn’t arrive in the same volume as previous years.

Workers in the Treasurer’s Office plan to analyze information gathered by the new technology. O’Leary says it will help to better determine who pays, when, and how.