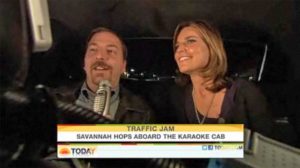 Now, the ‘Karaoke Cab’ has gone national, thanks to a feature story on this morning’s Today Show.

As part of the five-minute segment, Today Show co-host Savannah Guthrie took a musical ride around Arlington in the Karaoke Cab with Joel. As Arlington landmarks like Whitlow’s passed by in the background, Guthrie was joined in the cab by a number of random taxi passengers and by one not-so-random Arlington resident: NBC News White House Correspondent Chuck Todd.

Guthrie called the cab “a new innovative way of getting around the D.C. area” that “gives a whole new meaning to ‘traffic jam.'”

The segment was filmed on Friday, Sept. 16, with the cooperation of Clarendon-based Red Top Cab.