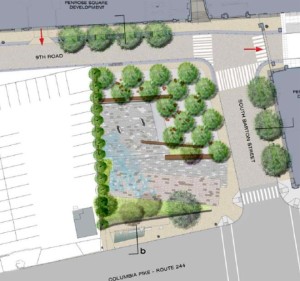 (Updated at 12:40 p.m.) The small grassy field in front of the new Penrose Square apartments on Columbia Pike will likely be transformed into a considerably less grassy, $2 million public plaza over the next year.

Over the weekend, the Arlington County Board will vote on whether to approve a construction contract and a public art contract for a “Penrose Square Public Plaza” at 2503 Columbia Pike. The 17,360 square foot plaza will be a central focus of the revitalized Columbia Pike “town center,” and will serve “as a meeting and gathering spot in the Corridor’s new urban fabric.”

The construction contract, worth some $1.6 million, will create “a tree-covered terrace with movable tables and chairs; an inner plaza with a water feature… an inscription of historical significance of the site; and a grass mound area shaded with trees for informal seating.” The water feature will be made sustainable “by collecting, treating and then reusing water from the fountain again to minimize daily water consumption.”

Yearly operating costs for the plaza are estimated at just above $100,000 per year, including $68,290 for grounds maintenance, $20,000 for fountain maintenance and $13,000 for utilities like water and electricity. 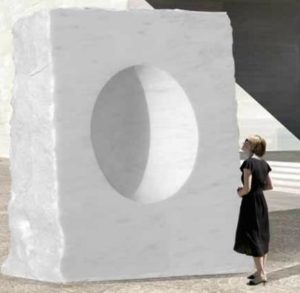 The plaza will also feature a public art installation. Dubbed “Echo,” the installation by artist Richard Deutsch will consist of two large granite slabs, each with a parabola carved out of one side. The slabs will be arranged so that someone at the end of one parabola will be able to clearly hear someone speaking at the other parabola, 30 feet away.

“The artwork is inspired by the significant role that Arlington’s Three Sisters Radio Towers, formerly located on the nearby Navy Annex property, played in the development of the nation’s trans-Atlantic communication capabilities,” the County Board report says. The sole-source contract to create the installation is worth $425,000.