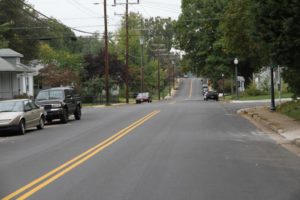 The Arlington County Board is set to vote this weekend on a plan to add three landscaped traffic circles to 16th Street S. in the Douglas Park neighborhood.

The $132,000 project — which also calls for the addition of curb extensions, textured pavement crosswalks and painted parking edge lines — is being recommended by the county’s Neighborhood Traffic Calming Committee, as a way to slow down traffic on 16th Street.

The street has “documented speeding problems,” county officials said in a staff report. According to county data, the average speed on 16th Street between S. Monroe Street and S. Quincy Street is 24 miles per hour, with 48 percent of traffic traveling faster than the posted 25 mile per hour speed limit and 15 percent of traffic traveling at 31 miles per hour or higher.

Speed humps were not considered for the traffic calming project, because the “85th percentile” speed required by law for speed hump projects is 32 miles per hour.

This summer, residents of homes along 16th Street were polled on the plan — to add “mini-traffic circles” to the intersections with S. Nelson, Oakland and Pollard Streets. Of those surveyed, 66 percent supported the plan, just above the 60 percent threshold for the project to proceed.

County Board Chairman Chris Zimmerman was likely among those who were polled. Zimmerman’s house is one block away from one of the proposed traffic circles.

(Residents will be asked to maintain the landscaping of the traffic circles.)

One 16th Street resident who opposes the project says she’s worried about the ability of emergency vehicles to navigate the traffic circles.

“My concern is that it’s an emergency response route,” the resident told ARLnow.com, adding that the county should “stop punishing 95 percent of the population for 5 percent — the speeders.”

The stretch of 16th Street in question is located south of Columbia Pike and just west of Glebe Road. The board is expected to vote on the traffic calming plan at its Saturday meeting.

Also on the board’s Saturday agenda is a traffic calming plan for 26th Street between N. Sycamore Street and N. Quantico Street in the East Falls Church neighborhood. The $92,000 project — for a stretch of road that has 71 percent of vehicles traveling above the speed limit — will include curb extensions (numbs) and one “speed cushion.” 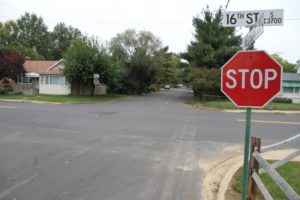 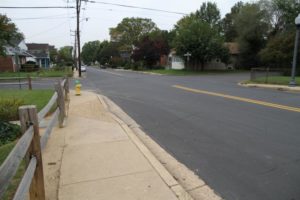