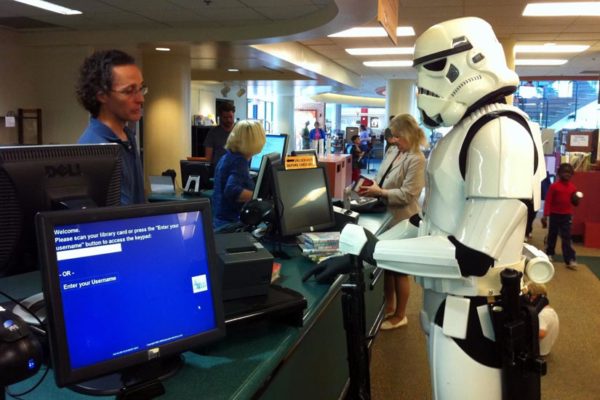 Star Wars Event at Library — Arlington Central Library hosted a Star Wars costuming event over the weekend, as the above photo (uploaded to the library’s Facebook page) demonstrates.

Alexandria Gets Bikeshare — The Alexandria City Council voted yesterday night to join the Capital Bikeshare program. For Bikeshare members in Arlington, that means point-to-point trips to Old Town will be possible, from CaBi stations in Crystal City, Pentagon City and along the Rosslyn-Ballston Corridor. [Washington Post]

N. Va., Military Contractor Mecca –Why have military contractors been moving their headquarters to Northern Virginia? Because they want “to be where the action is,” writes Forbes. In general: “Whether they generate sizable revenues from the government or not, big companies seem to like northern Virginia a lot, despite being surrounded by some of the worst traffic jams in the nation.” [Forbes]