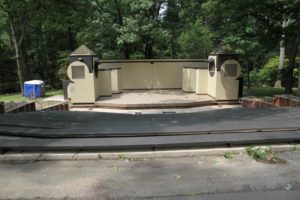 Performances at the Lubber Run Amphitheater this summer attracted sizable crowds and some community donations, the Arlington County Board was told this afternoon.

Thanks to much-needed renovations, the amphitheater sprung back to life in July, following a two year hiatus. Two teen talent and movie nights, and nine musical performances, were scheduled at the amphitheater this summer.

The performances attracted 2,400 attendees, Lubber Run Amphitheater Foundation co-president Esther Bowring told the County Board. In addition, $2,400 was donated to a “wishing well” near the amphitheater parking lot.

Bowring said her group of amphitheater boosters will continue working with county staff to make the venue a success in 2012.

“We’re going to be continuing to work with the staff to figure out what we need to do to help with the performances for next year,” Bowring said.

The foundation will work to recruit more volunteers and more private donations for next year’s performances, Bowring added. She said the group would like to see upgrades made to dressing rooms at the amphitheater, to allow additional types of performances to be held. In addition, they’re pushing for more local groups to be added to the performance schedule; such performances could be staged at little or no cost.

“We have a very talented community,” Bowring said.

County Board members expressed support for the amphitheater.

“It’s one of the best things we have going in Arlington,” said board member Walter Tejada.

“We look forward to even better things in the summers to come,” board chairman Chris Zimmerman said.