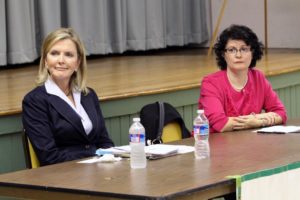 Merrick started out the night with a stump speech that focused on her background as a successful businesswoman and on her desire “streamline regulation and taxation so we can unleash the entrepreneurial spirit.” During the speech Merrick, a McLean resident, tried to strike a bipartisan tone.

“How will you stand up for my daughter’s right to choose?” one man asked.

“There are millions of good people on both sides of this issue,” Merrick replied. “I am pro-life and I am pro-woman.” 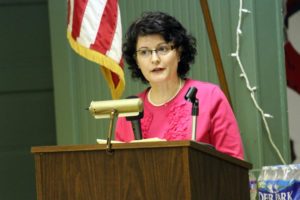 Merrick’s Democratic opponent, Arlington County Board member Barbara Favola, then answered and drew loud applause as she declared herself “100 percent pro-choice.” She went on to argue that if Merrick was elected, Republicans in the Virginia legislature would have a better shot at passing laws that restrict abortion rights and the rights of immigrants.

“I am very troubled by this social agenda,” she said of state Republicans.

Later, Merrick was asked about the A- rating she received from the National Rifle Association. The man asking about it was Omar Samaha, a three-year Cherrydale resident whose sister was killed in the 2007 shootings at Virginia Tech. Samaha asked if the candidates supported background checks on private gun sales.

“I’ve been around guns all my life, but in a safe way… a responsible way,” said Merrick, whose father was a Marine. Pressed on whether she thinks background checks should be required for all gun sales, Merrick said yes.

“I do think we should have a background check,” she said.

Favola was again unequivocal, saying she was proud of the ‘F’ she received from the NRA

“I feel very strongly that we have too many gun sales in this country, to people who are not mentally stable and should not be having access to guns,” Favola said. She went on to question why guns are allowed in Virginia’s bars and why localities like Arlington don’t have more power to regulate guns. 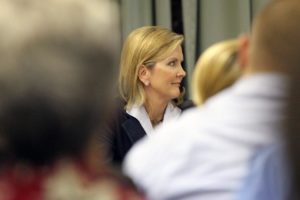 Another resident asked Favola and Merrick whether they’d release their answers to the survey the NRA sends to candidates. Favola said she, in fact, did not respond to the survey. Merrick said she would release the survey before the election, and then commented on the question itself.

“I have to say, these questions tonight have not been representative of what I’ve been asked as I’ve knocked on doors around the district,” she said.

“I am running on jobs and the economy,” said Merrick. “We need to diversify our economy. That is the most important issue.”

In her closing remarks, Favola said there’s “a definite choice” between herself and Merrick, adding that Merrick was listed on a Northern Virginia Tea Party website. Merrick, who earlier criticized the “rancor” on Capitol Hill, took the bait. She responded by saying that Favola “knows nothing about” bipartisanship.

“I’m not a member of the Tea Party, I don’t know how my picture got up there,” she said tersely. “Barbara Favola is not looking to solve problems, she’s looking to start a fight.”