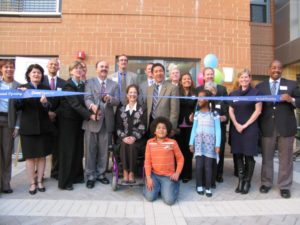 The opening of an affordable housing community in Ballston was welcomed with much fanfare on Tuesday evening. Numerous county officials joined new residents at The Jordan (801 N. Wakefield St.) for a grand opening ceremony.

The apartments are aimed at individuals or families earning 50-60% of the area’s mean income. A key selling point of the apartments is their proximity to local businesses and public transportation. They’re about one block from Ballston Commons Mall and about four blocks from the Ballston Metro. County Board Chairman Chris Zimmerman pointed out that this is important because the people who typically need public transit the most are those with lower incomes. Residents at The Jordan are also eligible for a public transit subsidy.

Zimmerman said because Arlington is becoming a more expensive place to live, it’s vital to be creative and innovative in providing housing options. He said the county is at risk of losing its diversity without such options.

“We need to make sure this is a place in which everyone can live,” Zimmerman said. “Not just those who are privileged with a high income.”

The property is owned and managed by AHC Inc., a nonprofit developer of low and moderate-income housing. They acquired the property through a land swap with The JBG Companies. It’s part of the larger mixed-use development under construction at the corner of Glebe Rd. and Wilson Blvd.

Five of the building’s units have three bedrooms and can accomodate larger families. Nine of the units are fully accessible to residents with disabilities. Amenities include a library, business center, courtyard with fountain and community room.

The first residents moved into The Jordan about a month ago, and the building is currently two-thirds occupied.