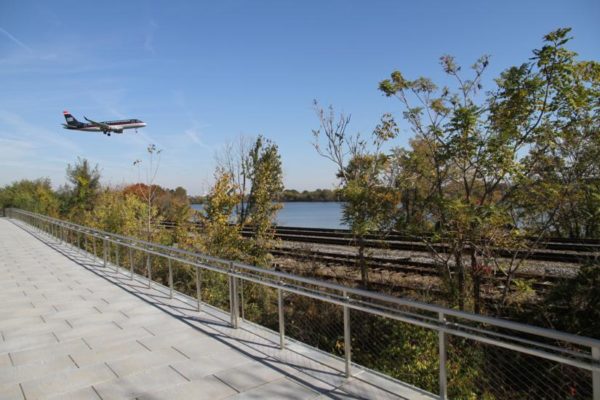 On Saturday, the public will be introduced to the new Long Bridge Park — just north of Crystal City — when county leaders hold an 11:00 a.m. ribbon-cutting ceremony.

First-time visitors will be pleasantly surprised to find that the 18-acre park is quite a sight to behold. A year and a half after construction on the park began, what was once a muddy brown field is now a welcoming green space, with picturesque views of Reagan National Airport, the Roaches Run Waterfowl Sanctuary, the Crystal City skyline and the Washington Monument. 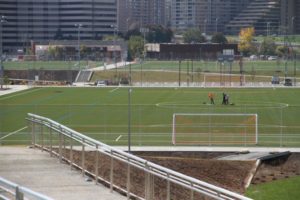 The esplanade runs parallel to a pair of CSX railroad tracks, used by freight trains, Amtrak passenger trains and VRE commuter trains. Lined with cherry trees, the esplanade will be utilized by walkers, joggers, cyclists and people who just want a scenic place to sit and relax.

Getting to the park will be somewhat of a challenge. Visitors coming to the Crystal City Metro station will have a bit of a hike before reaching the esplanade entrance, at the bend where Crystal Drive becomes 12th Street S. Those arriving by car will be able to use Long Bridge Drive — formerly Old Jefferson Davis Highway — to reach a modest surface parking lot. While Long Bridge Drive was recently renamed, it remains the worst public road in Arlington — with big bumps, ruts and potholes for most of the stretch between 12th Street and I-395/Boundary Channel Drive.

Find out more about the park’s first phase via Arlington County. A second phase of park construction, currently in the planning stage, will add a large new aquatics, health and fitness center, with an Olympic-sized pool and a 10-meter diving platform.