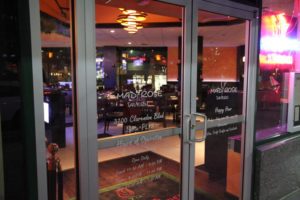 Bands, karaoke, DJs and other forms of live entertainment may soon be coming to two Clarendon restaurants.

Mad Rose Tavern (3100 Clarendon Blvd) and Mexicali Blues (2933 Wilson Blvd) both have live entertainment permit applications that are scheduled to be considered by the County Board this weekend. County staff has recommended that both applications be approved.

Mad Rose Tavern is asking for permission to host bands and karaoke between 9:00 p.m. and 1:30 a.m. Thursday through Saturday and between 9:00 p.m. and 12:30 a.m. Sunday through Wednesday. The restaurant is also asking for permission to erect an additional street-facing sign — but the Board is expected to defer that request until its December meeting. 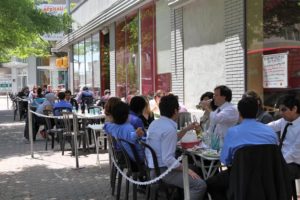 Mexicali Blue is similarly asking for permission to host bands, karaoke and DJs. Since the restaurant is located on the corner of a residential street, however, its managers have agreed to additional time restrictions. Mexicali is asking for amplified music between 10:00 p.m. and 12:30 a.m. on Fridays and Saturday, and acoustic music from 5:00 to 7:00 p.m. seven days a week.

While staff is recommending that Mexicali’s request be approved, it’s not without a bit of controversy. The Clarendon-Courthouse Civic Association complained in an email to the county that representatives from the restaurant declined to meet with the civic association. CCCA also expressed concern about the proposed live entertainment hours — ultimately expressing opposition to the permit request.

Numerous Garfield Street neighbors, however, signed on to a petition in support of the request.

Mexicali Blues held a live entertainment permit from 2003 to 2010, but it was discontinued due to lack of use. The permit restricted live entertainment to three nights per week, for no more than two hours at a time, and limited it to “primarily acoustic” music.

“The applicant’s current request would expand the intensity of live entertainment at the site by allowing acoustic music during ‘happy hour’ on weekdays, and by allowing amplified music on weekends for slightly longer than two hours,” county staff noted. “Staff believes that with the proposed conditions, there will be no undue impact to adjacent neighborhoods. Staff is recommending a short adadministrative review to monitor the operation of live entertainment.”