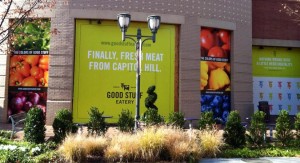 This will be Good Stuff’s second location. Its original location on Capitol Hill opened in 2008.

Washingtonian reported earlier this year that Good Stuff Eatery was hoping for a January opening. So far we’ve been unable to reach anyone associated with Good Stuff for confirmation, but a review of permit applications for the restaurant’s location at 2110 Crystal Drive reveals that it’s still without a building permit. That means an opening would likely be at least a couple of months away.