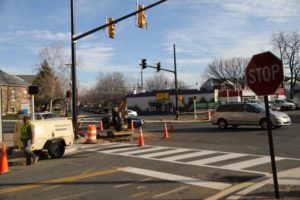 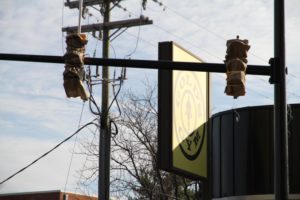 New traffic signals were being installed today at the busy intersection of Wilson Boulevard and N. Pollard Street in Ballston, near the Gold’s Gym and the Wiinky’s burger restaurant.

The installation comes about three months after the Sun Gazette reported, in an article entitled “Residents Find Developer Payments Don’t Translate Into Traffic-Signal Installation,” that a developer had agreed to contribute $150,000 toward the addition of traffic signals at the intersection back in 2004. At the time of the article, the County Manager Barbara Donnellan promised to investigate why the traffic signal had not yet been installed.

Though the signals were installed today, we’re told it may be a “couple of weeks” until they’re switched on.