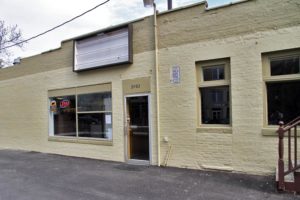 If a business could survive on earnestness alone, Wiinky’s in Ballston would be around for quite a while.

As it stands now, however, Wiinky’s is a homegrown restaurant concept operating within a very crowded market space — subs, salads and burgers — in a building that has seen a succession of failed restaurants. And they don’t even have a sign yet.

The restaurant is the brainchild of a young George Mason University grad and Arlington native named Ryan, who didn’t want us to use his last name. Ryan — nicknamed “winky” in high school — recently left his job as a manager of a local pizza restaurant to open his own business. He said he wanted to create a “cool spot” that would remind him of the backyard barbecues he used to love as a kid. 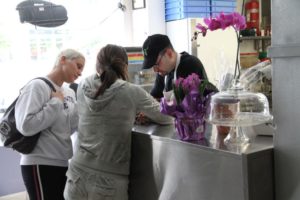 “All through college, I worked my way through school by cooking and by managing the pizza place,” Ryan said. “So I decided, hey man, this is my opportunity, this is my shot. ”

With an undergraduate degree in business, a passion for food and some seed money (source undisclosed), Ryan set out to find a well-trafficked but affordable location. He settled on 3902 Wilson Boulevard in Ballston, formerly home to Papi Pollo and Pike Grill. Although not very inviting from the street, the building does offer off-street parking and features a large, clean kitchen where customers can see their burgers being cooked.

“It’s not like I wanted to have a big casual dining place, I kind of wanted just a cool place that people could stop by and grab a bite to eat for lunch,” Ryan said. He added that he hopes the restaurant could also be a spot for first dates and quick meals with the kids. 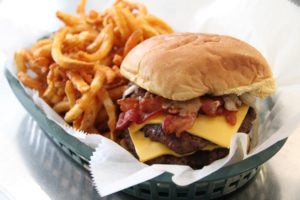 Wiinky’s main selling point is the quality of the ingredients. Ryan says he uses only certified Black Angus beef for the burgers and hot dogs, hormone-free chicken for the sandwiches and locally-grown produce for the salads. The menu also includes a few unique items like an avocado-and-tomato hot dog and a signature peanut butter-slathered bacon cheeseburger called the Wiink.

(Ryan says he created the Wiink because he loves peanut butter; he was unaware of last year’s peanut butter burger craze in New York City.)

Unlike some of the new gourmet burger joints that keep popping up around Arlington, Ryan says he wanted to create a family-friendly vibe. For that reason, he is planning on rolling out a kid’s menu and has decided not to apply for a license to serve beer or wine. Booze would hurt the image he’s going for, Ryan said. 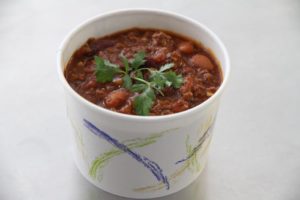 Sure, there are plenty of kinks for Ryan to work out: The lack of a sign (hopefully arriving next week), the lack of a working web site or Facebook presence (“coming soon”), the lack of drink options (a soda dispenser is on the way), and relatively slow service (although that’s not uncommon for made-to-order burger restaurants and should be getting faster once Ryan hires a few more staff members). There’s also the issue of marketing — or the lack thereof. But Ryan says he’s planning a grand opening next month and notes that he has been sending an employee out around Ballston to hand out buy-one-get-one-free cards.

At the same time, there are things that Wiinky’s is doing well in its first days in business. The curly fries are crisp and tasty, the chili is pleasantly spicy, and the Wiink burger is tasty, unique and incredibly filling. The burger patties themselves are thick and, if you really think about the flavor, seem to contain a bit of backyard barbecue nostalgia. I didn’t try the Angus chili dog, but Ryan insists that it’s as delicious as it sounds. And he says the cheesesteak sub is the best around.

It’s also clear that Ryan has plenty of support from family and friends, several of whom stopped by yesterday evening to drop off flowers, offer encouragement and grab an early dinner.