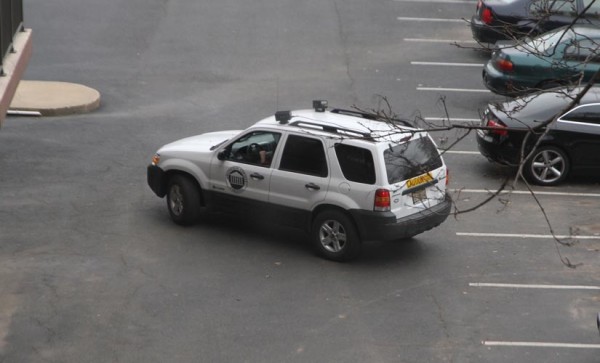 Just like Santa Claus, Arlington’s tax enforcers know whether you’ve been naughty or nice. But instead of giving you a lump of coal in your stocking, the tax enforcers are taking something: your license plates.

We spotted Arlington County’s Automated License Plate Recognition vehicle on the prowl (see photo, top) in an apartment parking lot today. The vehicle — the only one of its kind in the county fleet — automatically reads license plates and tells the tax enforcement employee inside which vehicles belong to owners with overdue parking fines, vehicle property taxes or other public debts.

When they find a vehicle whose owner owes a considerable amount of taxes and/or fines, the enforcers will confirm the vehicle type and then either use an electric screwdriver to take the vehicle’s license plates (for Virginia plates) or place a boot on the vehicle’s wheel (for out-of-state plates). The owner then has to pay up to get the plates back or the boot taken off.

(Sometimes owners who owe less than $200 are let off the hook with a simple warning note.)

The county bought the Automated License Plate Recognition system for some $30,000 back in 2004. Arlington was the first locality in the U.S. using such technology for tax purposes, according to the county Treasurer’s Office. Since it was first rolled out, we’re told the license plate readers have helped collect some $1.4 million.

“It has paid its way many times since then,” Arlington County Treasurer Frank O’Leary told ARLnow.com. O’Leary said the average debt collected is between $600 and $700.

The county typically does not tow vehicles, to relieve owners of the “extra hardship” of having to retrieve the vehicle and pay the towing fee, according to O’Leary.