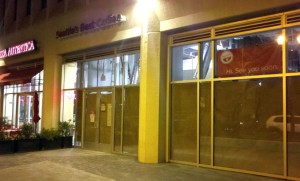 A new coffee shop and a new eatery are coming soon to Crystal City.

Interior construction is underway at a new Seattle’s Best Coffee location at 2450 Crystal Drive. The owners were originally hoping to open the store, which is now hiring, in mid-November. No word yet on when the store is now expected to open.

Also coming soon to Crystal City: a new California Tortilla location. The local Mexican restaurant chain is planning on opening a location on the southern portion of Crystal Drive, according to a source familiar with the plans.

The new California Tortilla — which would join the company’s Courthouse and Reagan National Airport locations in Arlington — will compete with a nearby Chipotle at 2231 Crystal Drive and with the District Taco cart, which makes regular visits to Crystal City.