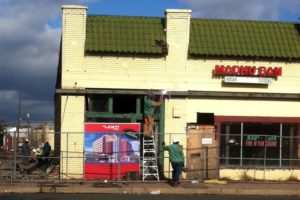 Some minor construction work has been spotted at the long-stalled apartment development site at 1200 N. Irving Street in Clarendon.

The site — which was recently purchased by USAA Real Estate from developer Zom Inc. — has laid fallow for years as Zom struggled with financing. A 186-unit apartment building with ground floor retail (previously dubbed “The Waverly at Clarendon Station“) is planned for the site.

Contractors started bidding on the project this fall, though no construction timeline has been formally announced. Late last month a tipster sent in a photo (above) of a small group of workers shoring up the empty shell of the former Madhu Ban Indian restaurant.

Renderings show that the building will preserve the existing retail facades on the block, though it’s not clear which of the establishments — including O’Sullivan’s Irish Pub, Sam’s Corner Deli and the new LeoNora Bakery — would remain open during and/or after construction. 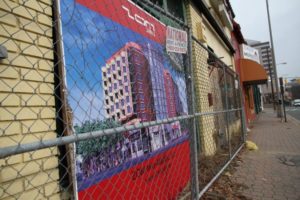 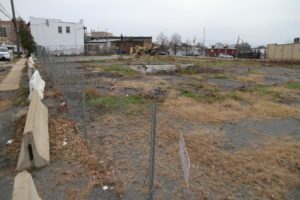