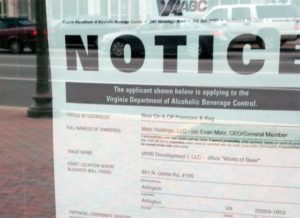 Update at 1:35 p.m. — Individuals associated with the business have said in the comments section that World of Beer plans to serve sausages and snack foods.

Watch out, Rustico, a new business is trying to achieve total beer domination in Ballston.

“World of Beer” has applied for an ABC permit for a proposed location at 901 N. Glebe Road. World of Beer is advertised as a “neighborhood, non-smoking, upscale social establishment dedicated to the enjoyment of beer and education of the beer enthusiast.”

The business will feature a rotating lineup of 50 beers on tap and 500 beers in bottles. It also promises to have 20 big-screen TVs for sports viewing, a stage to host local bands, and outdoor seating.

This would be the first D.C. area franchise for the Florida-based chain. The business is attempting to obtain a license for on-premises beer consumption and take-home beer sales — .

World of Beer is hoping to open its Ballston location in July, according to the chain’s web site. The local World of Beer Facebook page lists its expected hours of operations as 11:30 a.m. to 2:00 a.m. Monday through Saturday and 11:30 a.m. to 1:00 a.m. on Sundays.