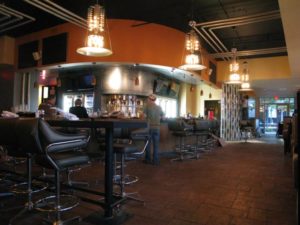 (Updated at 7:20 p.m.) With just hours to go until the long-anticipated opening of Rustico restaurant in Ballston, the staff is breaking out the Red Bull and the Mountain Dew, preparing for a long night of putting on the finishing touches and getting ready for the first customers to walk through the door at 11:30 tomorrow morning.

With about 200 indoor seats and 100 outdoor seats (which will stay in storage until next year), Rustico is trying to become the premiere lunch, dinner, happy hour and sophisticated night spot in Ballston.

It will certainly have the largest beer selection in Ballston, if not in all of Northern Virginia: 400 bottles, 40 drafts and 3 cask ales (the casks will be installed next week). By comparison, the original Rustico, in Alexandria, has 300 bottles, 30 drafts and 2 cask ales.

The bottles are displayed prominently behind the bar in two bright display cases. The taps, however, form the bar’s centerpiece — two dense horizontal arrays of colorful tap handles in a cut-out nook between the display cases.

Unlike the Alexandria location, the Ballston Rustico will feature a bar area separated from the dining area. There will also be a semi-private dining areas for groups and parties. 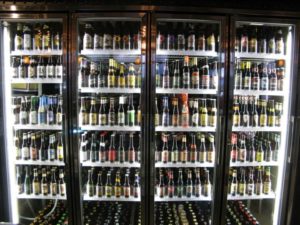 The bar area features five flat screen TV’s (tuned primarily to sports), two long tables, a dozen booths and at least a dozen seats at the bar itself. The bar stools are modern, padded and comfortable, with a foot rest and arm rests.

The dining area is elegant and modern. The seats are molded wood — no padding, but surprisingly comfortable. Booths run along either side of the room.

Management tells us that more interior touches will be put into place in the two weeks after opening. A bare wall near the bar will be decorated, a raw wooden wall in the dining area will be illuminated with LED lighting and more mirror accents will be installed.

Neighborhood Restaurant Group co-owner Michael Babin says he’s proud of the Rustico concept. While Babin, chef Steve Mannino, beer director Greg Engert and the rest of the team team is focusing on getting the Ballston location up and running, another Rustico may be on the way — eventually. Babin says nothing has been nailed down yet, but he’d like to see Rustico continue to expand.

END_OF_DOCUMENT_TOKEN_TO_BE_REPLACED

More Stories
When Do Kids Go Trick or Treating in Arlington?Morning Notes