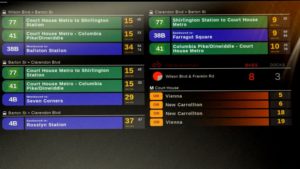 Visitors to Java Shack (2507 Franklin Rd.) in Courthouse can now pick up more than just a coffee and bakery item. A transit screen fixed near the register lets them pick up a better idea of what transit options are available in the neighborhood.

The pilot project came about when Arlington County Commuter Services offered to put up funding for creating systems that help people better understand their transit options. They collaborated with Mobility Lab to come up with some ideas, and the transit screens were born.

David Alpert is Mobility Lab’s Project Manager for the Transit Tech Initiative, and was a bit surprised by the request. He says it’s fairly unusual for a local government to push for this kind of research and development.

“We wanted to push the envelope with this technology,” Alpert says. “It’s really great that Arlington is able to provide that.”

The screens display constantly updated times and availability for a variety of transit options, including Metrobus, Metrorail, ART Bus and Capital Bikeshare. Alpert believes more people would use public transit if they realized how many options are readily available in real time. He said public transit not only helps people get around, but improves the quality of their lives.

“Arlington has had so much growth in the Rosslyn to Ballston corridor, but not a ton of traffic growth, because so many options are out there,” Alpert said. “Buses, metro, biking. It improves, of course, the environment but people’s happiness as well.” 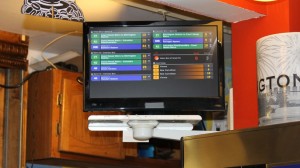 So far the only other location to be included in the pilot program is The Red Palace in Washington, DC. Java Shack owner Dale Roberts was approached due to his previous work with ACCS. Roberts says the screen, which hangs unobtrusively from the ceiling near the cash register, doesn’t interfere with his business at all. In fact, customers are asking about it and have given a lot of positive feedback.

“The idea is to get people to be aware that there are lots of options besides just using their own car,” Roberts said. “Seeing that screen lets me know how many options are right there at the corner of the coffee shop.”

Mobility Lab is still working out how it will fund the project in order to expand it. The equipment costs about $400, and businesses will likely have to foot the bill. Alpert says the pricing structure hasn’t been formulated yet and  many different ideas have been floated.

Idealistically, Roberts believes the transit screen concept is a great idea. Practically, that may not be the case. He’s heard praise for the idea from neighboring business owners, but all have been deterred by the anticipated cost.

“I think it’s a great thing,” Roberts said, “But right now during the economic times we’ve all been through, every business is watching their finances.”

Roberts said if he were going to make such a large scale investment, he’d want more concrete evidence that it would have a positive financial impact on his business. Alpert believes just having the screens will be enough to get businesses noticed more, leading to increased foot traffic. He also said the transit screens will allow people to spend more time in a store, restaurant or bar because they won’t leave early in an attempt to catch their bus or train. That extra time could prompt customers to buy an additional item or two.

Mobility Lab hopes to soon expand the pilot program with paying customers. There’s also interest in doing a more formal survey to figure out what tweaks can be made, and how to pay for the project in the future. Overall, the transit screen has received positive feedback from customers at Java Shack.

“It took people a while to notice it,” Roberts said. “But once people noticed it they really wanted to see it there.”