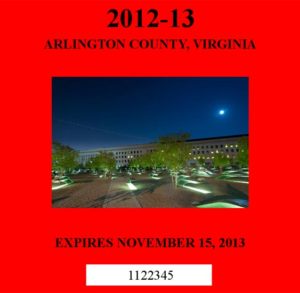 The new 2012-2013 Arlington County vehicle decal has been revealed.

The winner of this year’s vehicle decal design contest was announced at this afternoon’s County Board meeting. Out of a group of four design finalists, a decal with a photo of the Pentagon memorial received the most votes.

The decal, entitled “Silent Memories,” was designed by Jeppe Callander, an exchange student from Norway who’s attending Wakefield High School. Callander said he originally took the photo of the memorial to show his mother.

Arlington residents cast nearly 2,000 votes cast in the annual contest. About 155,000 decals will be mailed to vehicle owners this summer.