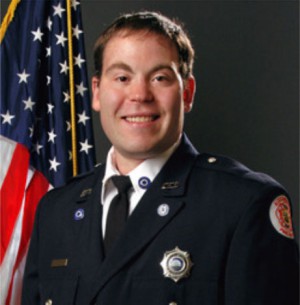 An Alexandria paramedic has succumbed to his injuries following a 30 foot fall off a highway bridge Wednesday night.

Joshua Weissman, 33, was on the scene of a vehicle fire on I-395 near Shirlington when he fell through a small gap between the northbound and HOV lanes, on the bridges over Four Mile Run. The Bristow resident, a seven-year veteran of the Alexandria Fire Department, fell into the creek below and was knocked unconscious.

Weissman was extricated from the water by rescuers from Arlington and Alexandria, and was rushed via ambulance to Washington Hospital Center. In the end, however, Weissman’s severe head injury was proved to be fatal.

The Alexandria Fire Department is providing counseling for its personnel and for the Weissman family, including his wife. The couple did not have children. Weissman was based out of Alexandria’s Seminary Road fire station.