During its meeting on Saturday, the County Board is expected to vote on the proposed revamp of the central plaza at Pentagon Row.

The proposal includes plans to expand the length of the ice rink by 40 feet, add synthetic turf and add two 800 square foot freestanding retail structures. Approving the proposal would also add an additional month to the ice rink’s operating season, making it October through March, instead of November through March.

The small structures would be added to the northeastern and southwestern areas of the plaza, to be used year-round. At the January meeting, county staff suggested only adding the northeastern structure. There was concern that the southwestern structure along S. Joyce St would obstruct views into the plaza and make the space feel too crowded. When the applicant, Street Retail, Inc., said it wouldn’t be economically feasible to build only one, the issue was deferred until this Saturday’s meeting.

County staff recommend approval of the plan, with a few tweaks to the original proposal. To prevent visual obstruction, the new freestanding structures will have to be as transparent as possible. The one on S. Joyce St will also be built with a flat roof instead of a gabled roof.

As part of the expansion of the ice rink area, two existing planters will be removed. To make up for the lost green space, artificial turf will be added. It would be exposed during warmer months and covered by the rink during colder months. Adding the turf actually allows for an additional 775 square feet of space that is currently largely unusable due to the planters. A number of conditions must be met to ensure the turf is of high quality and can handle hot weather.

Street Retail, Inc. has been working with the Aurora Highlands and Arlington Ridge civic associations to address questions and concerns about the proposed changes. Residents were surveyed about the proposal and 70 percent are in favor of the plan. Some of the new conditions in the proposal were added in response to concerns raised by neighbors.

The vote on the proposed changes comes amid a restaurant shakeup at Pentagon Row. Several restaurants suddenly shut their doors late last year, and will be replaced by new ones in the coming months. 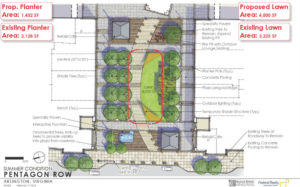 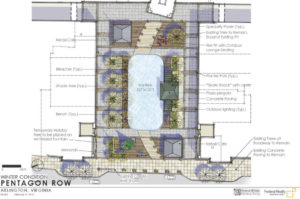