It’s that time of year again.

An opening date has been set for the Pentagon Row ice skating rink in Pentagon City, and it’s less than two weeks away. The seasonal rink, currently under construction, will open on Tuesday, Nov. 1, a spokesperson for the Westpost shopping center tells ARLnow.

The nearly-7,000 square foot rink located in the plaza at 1201 S. Joyce Street is said to be the “largest outdoor ice skating rink in Northern Virginia” and the second-largest in the state.

It also opened around the beginning of November last year, which was a week earlier than the prior year. It remained open until March. The rink maintains special hours on holidays and other public school off-days.

Reservation are required to skate but the online reservation system did not appear to be working this morning. Last year admission was $10-11 and skate rentals were $5.

Hanukkah is here and it’s again time to light the menorah flame while on ice.

The annual “Chanukah on Ice” event is back this year, set to take place this Thursday (Dec. 2) evening outside on the Pentagon Row Ice Skating Rink in Pentagon City.

The event, organized by the Chabad Lubavitch of Alexandria-Arlington, will include skating, latkes, kosher hot dogs, a raffle, and the lighting of a six-foot menorah for the fifth night of Hanukkah. It will take place from 6-8 p.m. and is family-friendly.

In case of heavy rain, the ice skating rink will close, but as of right now, weather looks clear and seasonably warm for Thursday.

This fire meets ice holiday event has been held for at least a decade. In past years, Arlington officials have provided their presence and helped light the menorah. No word yet who might be there this year, though.

“Chanukah on Ice” isn’t the only festival of lights event going on this week in Arlington.

On Tuesday night (Nov. 30), the Chabad Lubavitch of Alexandria-Arlington will also host a menorah lighting outside of the organization’s headquarters at 1307 N. Highland Street in Clarendon starting at 6 p.m. There will be music, latkes, dredels, chocolate, and pre-packaged jelly donuts for all.

Congregation Etz Hayim at 2920 Arlington Blvd is putting on a family Hanukkah party on Sunday (Dec. 5), the last day of the holiday. Games, magic, and latkes will be the entertainment, plus there’ll be a sock collection for local non-profit Bridges to Independence.

Hanukkah (or “Chanukah”), the festival of lights, began last night and will continue for eight nights. The holiday will conclude next Sunday night (Dec. 5).

Starting the season a week earlier than last year, the nearly-7,000 square foot rink located in the plaza at 1201 S. Joyce Street in Pentagon City is said to be the “largest outdoor ice skating rink in Northern Virginia” and the second-largest in the state.

The rink will be open until mid-March, providing about four and a half months of skating time. There are a few changes at the rink from last year, when capacity and mask restrictions were quite a bit tighter.

Masks are now optional while skating, an employee tells ARLnow, as opposed to required last year, though will still be sanitizing high-touch areas including skates and rails around the rink.

Capacity is increasing from the 50% mark in 2020 to full capacity. That means the number of skaters allowed on the ice at any given time is being doubled, from 75 last year to 150. Social distancing is still being requested while on the ice, waiting to get on the ice, and at the rental facility, though.

There’s also a pricing change, with admission rates increasing by a dollar from last season. It now costs $11 for those 13 years and older. For those younger than 13 and senior citizens, admission is $10. Skate rentals are $5.

Group and party rates are being offered once again as well as private skating lessons. Reservations for skating can still be made online.

Despite the shopping center on S. Joyce Street rebranding late last year to “Westpost,” the ice skating rink remains called “Pentagon Row Outdoor Ice Skating Rink.” However, that could change in the coming months, writes a rink manager in an email to ARLnow.

In 2013, the ice skating rink underwent a renovation that increased the size by 50% and added an outdoor dual-sided stone fireplace on the side of the rink for those off the ice.

The rink is open every day of the week, including holidays: 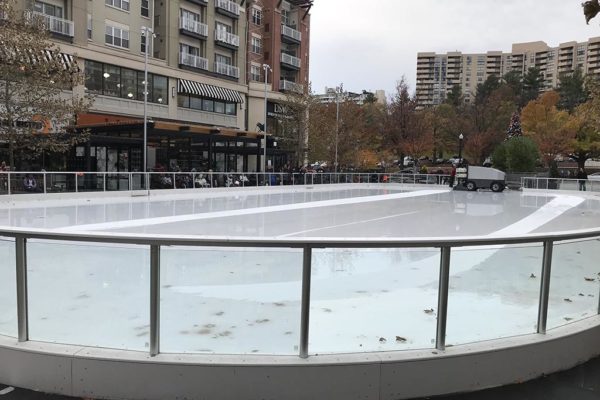 In a place of American power, a surefire sign of the dawning of a new era is here.

Yes, in the metaphorical shadow of the Pentagon, the Pentagon Row ice rink is now open, kicking off the 2020-2021 winter season.

The ice rink provides an opportunity for some seasonal outdoor recreation, a relatively safe activity despite the recent rise in coronavirus cases. This year, new safety protocols are in place, including a mask requirement and online-only reservations.

The rink — the largest in Northern Virginia — will be open seven day a week from now through mid-March.

The 6,840-square-foot ice rink is the largest outdoor rink in Northern Virginia and the second largest in the state. It features an outdoor dual-sided stone fireplace for lounging during skating breaks.

“I am excited to bring an outdoor activity that promotes exercise, strength & balance training, and relaxation for all ages to the Arlington neighborhood,” said Lance Curran, rink operator.

The rink provides a safe outdoor environment and a plan is in place that surpasses what is required to bring a high level of cleanliness to the facility and equipment including: skates, skater aids, and other high touch surfaces. Tickets must be purchased in advance online to ensure contactless ticketing and to minimize overcrowding.

The following safety procedures and protocols will be followed:

The rink is open every day until mid-March during these hours:

Pentagon Row features numerous retail and dining destinations including pop ups and new concepts from popular D.C. area restaurateurs, including Napoli Salumeria opening soon to enjoy before or after a skate.

An Arlington resident has produced a new documentary about the mesmerizing world of synchronized skating.

The female-dominated sport, in which teams of eight to 20 skaters perform formations and step sequences in-sync to music, is little-known to most people, the filmmakers said. When Pinaglia was doing research for the film, she could not find any previous documentaries or films based on synchronized skating.

We talked with both filmmakers about the documentary and the sport.

How did you get involved in the project?

Nicole: I have been a synchronized skater since I was nine years old. Angela and I met at American University and we were working together for the school communication summer program. I was always talking about synchronized skating and Angela didn’t really care until about three years ago. Angela saw it for the first time in Arlington. She realized then when she saw it how special it was.

Angela: When you’re in the ice rink you can literally feel a wall of wind as sixteen skaters are skating past you on the ice, so it’s a very immersive experience. I turned to Nicole afterwards and I said this is really cool, [and that] we should do a documentary.

END_OF_DOCUMENT_TOKEN_TO_BE_REPLACED 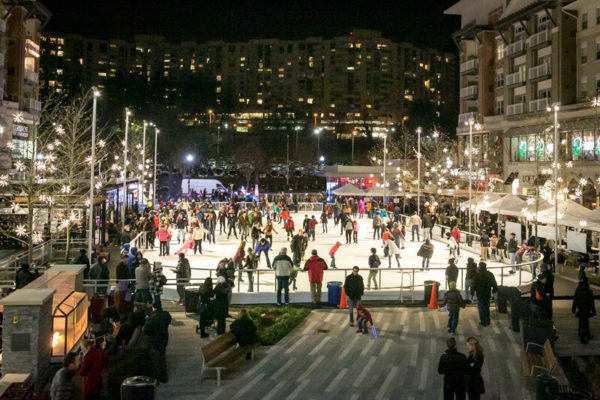 Just in time for the start of November and the arrival of cold weather, the ice rink at Pentagon Row is now open.

The outdoor rink in Pentagon City will be open daily through mid-March. In addition to skating for individuals and families, the rink also offers skating lessons, birthday parties and opportunities for group fundraisers.

“The 6,840-square-foot ice rink is the largest outdoor rink in Northern Virginia and the second largest in the state,” noted a PR rep. “It features on outdoor dual-sided stone fireplace for lounging during skating breaks.”

The hours of operation are below. 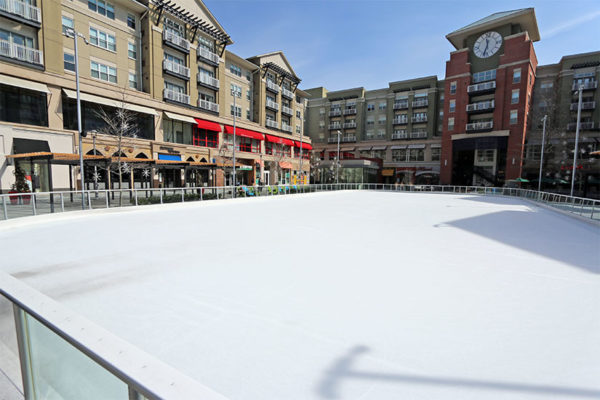 Fall foliage may be MIA so far, but there’s another sure sign of the season that signals that sweatshirt weather is here to stay for awhile: the opening of the ice skating rink at Pentagon Row.

Renovated in 2013, the outdoor skating rink is billed as the largest in Northern Virginia, at 6,840 square feet. It hosts thousands of skaters each year during the cold weather months, even when it’s not particularly cold.

The rink is open seven days a week, including on holidays. Hours and pricing are posted on the rink’s website. 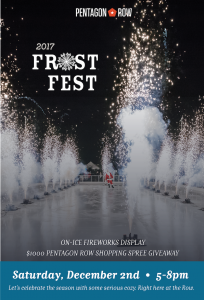 Frost Fest begins at 5 p.m. at the ice rink at Army Navy Drive and S. Joyce Street. The event will include an on-ice firework display with Santa Claus, music from a DJ, live entertainment from local artists and ice sculptures.

Attendees can also sample foods from some nearby restaurants, pick up holiday shopping specials and win a $1,000 Pentagon Row shopping spree giveaway.

Pentagon Row’s 6,840-square-foot outdoor ice rink is now open, and will be open on all holidays. Admission costs $8 for those aged 12 and under); and $9 for those aged 13 and older. Skate rental costs $4.

The rink’s hours will be as follows: 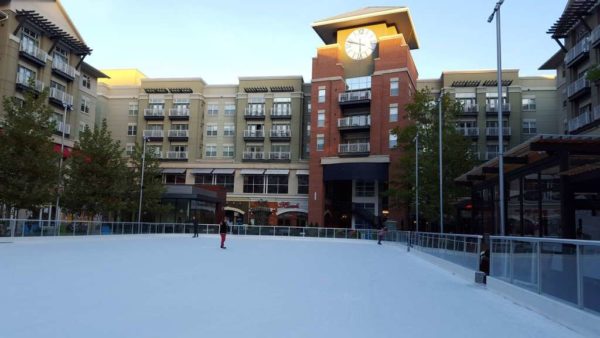 The rink hosted its first skaters Tuesday, according to its Facebook page. A sure sign of the season, the rink — which was expanded in 2013 — generally opens around mid-fall and closes in mid-to-late March.

The rink’s hours vary, but it opens at noon on weekdays and at 10 a.m. on weekends and certain holidays, closing between 7 p.m. and 11 p.m. depending on the day.

Admission is $9 for adults and $8 for kids and seniors. Skate rental is $4.

As of noon today, there was no one skating at the Pentagon City Row ice skating rink, as the sun shone and temperatures reached into the 70s.

With above-average temperatures in the forecast for the foreseeable future, the skating rink may soon look as much like a swimming pool as a winter wonderland.

Nonetheless, the rink is slated to stay open until Easter Sunday, March 27, according to a press release sent last week.

The rink’s website says it is “open everyday including all holidays, even in warm weather.” Last year the rink was open until March 22. 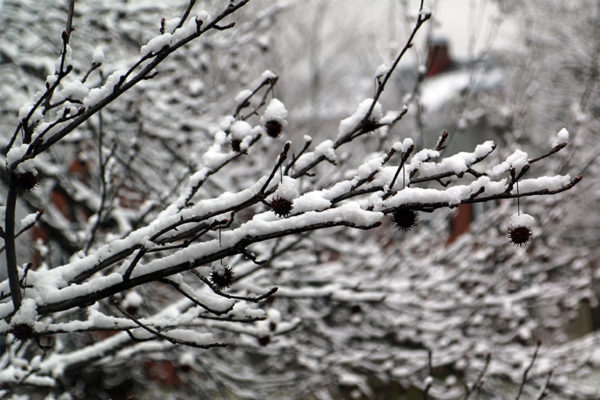 Big Weekend for High School Sports — On Saturday, Wakefield will face Deep Run in the first round of the 5A state basketball tournament. The game is being played at Robinson High School in Fairfax at 5:30 p.m. Tonight, meanwhile, in what’s being called the hockey rivalry game of the year, Washington-Lee will face Yorktown at Kettler Capitals Iceplex. The puck drops at 8:10 p.m. [VHSL, Twitter]

Garvey Discusses Economic Incentive Push — Arlington has been actively making economic development deals, in some cases offering economic incentives to attract new employers to the county. But County Board Chair Libby Garvey said Arlington is being selective about the opportunities it pursues. “If it’s not good enough, we don’t do the deal,” she said. [InsideNova]

Tasty Sandwich from Arlington Eatery — Among the five “over-the-top, gluttonous, guilt-inducing new sandwiches in Washington” just highlighted by Washingtonian Magazine, there was one from the recently-opened Texas Jack’s in Lyon Park: a $12 brisket sandwich with tender Allen Brothers brisket and “a hefty spoonful of melty queso.” [Washingtonian]

Charity Ice Skating Party Tomorrow — The Pentagon Row skating rink will host a “Decades on Ice” charity skating party Saturday starting at 6 p.m. The evening will start with tunes from the 60s, going up a decade each hour until the 2000s. Half of all sales will be donated to help cure Cystic Fibrosis. [Facebook]