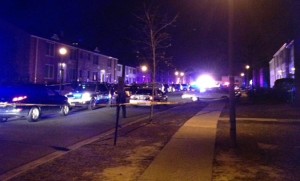 (Updated at 3:55 p.m.) A man was shot in Arlington Friday night by a suspect who remains at large.

Just before 8:00 p.m. on 4200 2nd Road N., in the Buckingham neighborhood, an unknown assailant wearing black clothing and a ski mask approached a man and shot him two times. The victim is described as a Hispanic male with gunshot wounds to the thigh and abdomen. He was reported to be in critical condition after the shooting. As of Saturday afternoon, police said he was still in the hospital.

The assailant, who is still at large, is described as a 5’8″ black male. He’s said to be armed and dangerous. Police say they’re not sure if the suspect knew the victim or if it was a random act of violence. As they continue to investigate the incident, police are encouraging anyone with information about the suspect to call them at 703-558-2222.