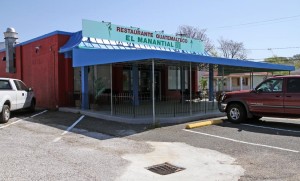 The former Las Delicias Restaurante at 1621 S. Walter Reed Drive has a new sign and a new name.

County inspectors were spotted parked outside the restaurant earlier today. It’s unclear when exactly the restaurant is going to open, though. A woman who answered the phone at the Lyon Park El Manantial restaurant referred us to a phone number that went straight to voicemail.

Las Delicias closed not too long after a brawl in January. We haven’t heard of any major fights breaking out at El Manantial, but a man did recently bite off part of his friend’s finger in the parking lot outside El Manantial and several other businesses.