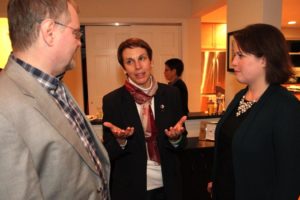 Libby Garvey officially resigned from the Arlington School Board this morning following her election to the Arlington County Board yesterday. That opens up Garvey’s seat to an appointee to be named by the School Board.

Per Virginia law, anybody interested in replacing Garvey on the School Board must be a qualified Arlington voter and must not be a School Board employee. Interested parties are asked to submit a resume and a letter of interest to the School Board by 5:00 p.m. on Wednesday, April 11.

A public hearing on the School Board vacancy will be held on the evening of April 17. The appointment itself is scheduled to take place during the School Board meeting on April 26. The appointee won’t be in the unelected office for very long — Garvey’s term is up at the end of December and the seat will be up for grabs in November’s general election.

Garvey is set to be sworn in as a County Board member at 5:00 tonight. Like her appointed School Board successor, Garvey will have to run to keep her seat in the November general election.