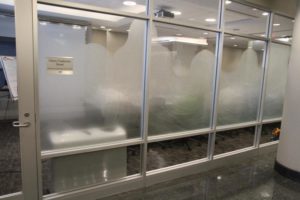 In an effort to combine form and function, Arlington has outfitted four conference rooms at the county government building (2100 Clarendon Blvd) with glass panels etched with unique designs by local artist Linn Meyers.

Before the artwork was proposed, the county was already planning to install an industrial film over the glass panels that line the conference rooms, to minimize the “distracting ‘fishbowl effect'” of people constantly walking by and peering inside during meetings. By combining the money set aside for the film installation and an existing fund for new public art in the building, the county was actually able to complete the project “well under budget.”

The artwork was dubbed “Untitled” by Meyers.

“Demonstrating how the inclusion of public art can be a savvy, attractive and economical civic design solution, Untitled is the second of eight major public art projects being delivered in a 12 month period,” said Jim Byers, Cultural Marketing Manager for Arlington Economic Development. “It is part of a broad initiative by Arlington’s Public Art Program to grow capacity in local artists to undertake public art projects.”

The etched panels were installed in three conference rooms on the ground floor of 2100 Clarendon Boulevard, and one conference room on the 3rd floor, near the County Board room. An official dedication for the artwork is planned for 10:30 a.m. on Tuesday, April 10.