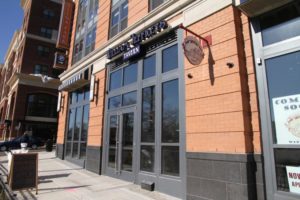 (Updated at 11:25 a.m.) William Jeffrey’s Tavern (2301 Columbia Pike) is expected to be a topic of conversation at Saturday’s Arlington County Board meeting. The restaurant has requested a permit for live entertainment and dancing, in addition to a permit to have outdoor seating.

The entertainment permit would cover the hours of 11:00 a.m. to 1:30 a.m. every day of the week. However, restaurant owners indicate they only intend to provide live entertainment and dancing during late evenings on Thursdays, Fridays and Saturdays, and for brunch on Sundays.

Although the restaurant is in a mixed-use building, county staff points out it is not directly adjacent to any housing, and would therefore not disturb residents. Permit reviewers also believe allowing William Jeffrey’s Tavern to have live entertainment would assist in achieving the county’s goal of revitalizing Columbia Pike. For these reasons, the recommendation is to allow the permit.

One of the requirements for obtaining the permit is to provide dedicated security during times when there is live entertainment. The restaurant will also have to keep its doors and windows shut during performances, to comply with the county noise ordinance. The permit will come up for review in one year.

The recommendation for the outdoor cafe permit, however, is to defer the issue until the board’s May 19 meeting. At issue is compliance with the Americans with Disabilities Act, due to a grade change where the outdoor cafe would be on the sidewalk. Staff also wants to ensure that the seating will be only for temporary use, which the county typically defines as nine months of the year.

The recommendation to defer until the May 19 meeting is to give the owners of William Jeffrey’s Tavern adequate time to address the county’s concerns.