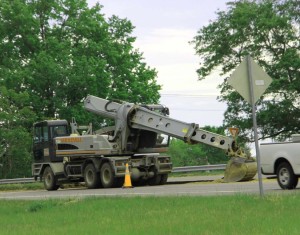 The project has been about two decades in the making, and VDOT spokeswoman Joan Morris says it finally got underway this week. Right now, it’s still in the very preliminary stages while workers set up a field office and work out logistics.

The revamp is supposed to have eight stages, and is slated to run through August 2015. Once the first stage gains steam, a detour will be constructed for use on certain weekends. VDOT says traffic may need to be re-routed during off-peak hours, but efforts will be made to keep lanes clear during the morning and evening rush hours on weekdays.

The project is budgeted to cost $51.5 million, with federal and state funds paying for most of it.