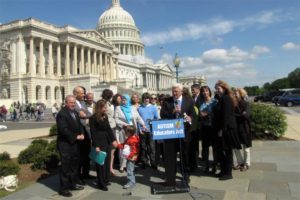 At a press conference this morning, Moran was joined by officials from Arlington Public Schools, along with several Arlington parents of autistic children. The bill — the “AUTISM Educators Act” — could specifically benefit Arlington schools, where more than 10 percent of the special education population has been diagnosed with ASD, according to Moran’s office.

Congressman Jim Moran, Northern Virginia Democrat, today introduced legislation, the “Autism Understanding and Training In School Methodologies for Educators Act of 2012,” or the “AUTISM Educators Act,” to establish a pilot program to train teachers who work with children with autism spectrum disorders (ASD). Moran was joined at the bill announcement by original cosponsor Rep. Mike Doyle (D-PA) parents, children with ASD, and local officials from Arlington County and City of Alexandria Public Schools.

“This legislation is the product of a grassroots effort by parents, instructors, school officials and caring communities,” said Rep. Moran. “Autism Spectrum Disorders are being diagnosed at an exploding rate. We have a responsibility to do everything in our power to provide the best education for our children.”

Autism Spectrum Disorder is now the fastest growing serious developmental disorder in the United States, increasing the number of children with high-functioning autism (HFA) taken out of special education and placed in mainstream classrooms.

Moran’s legislation will create a five-year grant program to allow local school systems to partner with experienced university or non-profit programs to establish a training program for general education teachers who have large numbers of HFA students. The programs will also incorporate parental involvement and retention of skilled educators.

The AUTISM Educators Act has received endorsements from a wide range of organizations including Autism Speaks, the Arlington County School Board and Arlington Special Education Parent Teacher Association.

“Congressman Moran’s bill will provide much needed funding for local school districts as they strive to meet the needs of the growing population of students with Autism Spectrum Disorders (ASD). In Arlington, as across the nation, we have seen a significant increase in the number of students with ASD: from 100 students in 2003 to more than 350 students this year with ASD,” said Abby Raphael, Chair of the Arlington County School Board. “Providing general education classroom teachers and others with additional training is essential to ensuring that students with ASD are successful. The Arlington School Board appreciates Congressman Moran’s leadership and recognizes the work of our very active parent community in working with him, which has resulted in this important legislation.”

In March the Centers for Disease Control released a new study citing the growing rate of ASD. One in 88 children in the United States are diagnosed with ASD before their eighth birthday. Boys are five times more likely as girls, with one in 54 diagnosed with ASD.

“Congressman Jim Moran has brought renewed hope to families across Arlington who have a child on the autism spectrum,” said Alex Arriaga, Arlington resident and parent of a child on the spectrum. “The AUTISM Educators Act of 2012 can help bring essential training to classrooms across the country, improving the outcomes for students on the autism spectrum and making it more likely that they can fulfill their great potential.”

The targeted pilot program would be available only to schools with high incidences of ASD; qualifying school systems must have 10 percent or more of the special education population diagnosed with ASD.