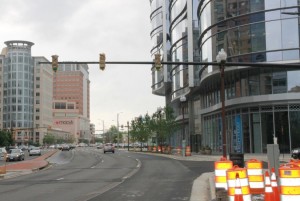 Two new traffic lights have been installed on N. Glebe Road, where new development is causing concerns about pedestrian safety.

One light went in this week on southbound Glebe Road at N. 9th Street, and another on the northbound side at N. Vermont Street. According to the Department of Environmental Services, it was part of a site plan development with the new construction on the west side of Glebe Road.

New buildings in the area, including the recently opened residences at The Jordan and the Virginia Tech Research Center building, which houses commercial tenants such as The Greene Turtle, have brought additional pedestrian traffic. It’s expected to increase even more once the office building at 800 N. Glebe is completed.

DES spokeswoman Shannon Whalen McDaniel says that’s why it was necessary to put in traffic lights, to establish a safe pedestrian connection between the new construction on the west side of Glebe and the businesses and Ballston Metro station on the east side.

Currently, the lights are still covered up. If all goes according to plan, they should be turned on by the end of the month.