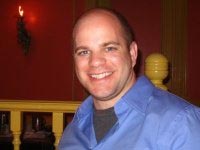 It’s going to be quite the uphill climb for Republican County Board candidate Matt Wavro.

Wavro will be facing Democrat Libby Garvey and perennial Green Party candidate Audrey Clement in November, following Garvey’s recent defeat of a better-known Republican candidate in a very low-turnout special election — an election that was billed as the GOP’s best chance of getting on the Board since 1999.

Wavro’s chances are especially long due to the other, higher-profile races that are on the bill for November 6 — the presidential race, a U.S. Senate race and a House of Representatives race — all of which are sure to draw droves of Democrats to the polls in Arlington.

Nonetheless Wavro, who lives in Crystal City and works as a human resources consultant, says he’s prepared to make a strong case to voters for why he should be elected. In an email to ARLnow.com, Wavro detailed some of his positions on the issues.

Like many in Arlington, I am concerned with the direction of our county. We score well in magazine surveys, but the health of our civil society and the quality of life of our neighbors is a much better measure of the performance of our political leadership. The civil and political health of our community continues to decline under the control of a single-party controlled County Board. It is the lack of any dissenting voices on the board that has allowed the County Board to continue their plans to rapidly redevelop neighborhoods and redesign our lives and our community around their ideological beliefs.

I am running for a seat on the Arlington County Board to stand up for our neighborhoods. It shouldn’t be considered part of living in Arlington that you have to regularly mobilize your neighbors to speak out against a local government action, program or plan that members of the County Board have determined does not require public input. We deserve a County Board Member who will insist on meaningful collaboration with homeowners, renters and local businesses instead of a top-down, rigid ideological approach to sidewalks, streets, zoning, permits, signs and outdoor restaurant seating.

I am running to bring active and engaged leadership to the County Board. The Arlington County Civic Federation has regularly called for an Inspector General to provide a professional and independent review of governmental operations to the County Board and the community. When elected, I will work with my colleagues to establish an Office of Inspector General to provide this much needed governance reform. If the current County Board continues their obstruction and insistence on a structural lack of accountability on tax, budget and spending issues, I will raise donations myself to fund an analogous position through a non-profit entity.

I am running to stand with our community against the wholesale redevelopment of particular neighborhoods and to develop a better plan for Columbia Pike than the trolley. I am running to prove that Arlington County government can be both effective and efficient without increasing taxes on top of already increased property-tax assessments. Lastly, I am running to appropriately prioritize projects in our county’s capital improvement program so that we can give our schools the flexibility to solve the capacity problem without another massive tax increase or an equally damaging downgrade to the County’s bond rating.