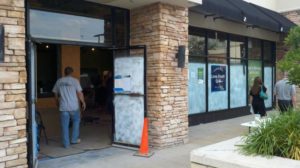 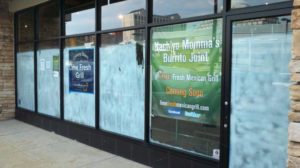 Update on 5/21/12 — A Lime rep says the opening of the company’s new Pentagon Row location has been delayed until Wednesday, May 30.

The fast-growing restaurant chain says they’ll be opening in the former Baja Fresh space at Pentagon Row (1101 S. Joyce Street) on . As of last night, interior construction was still underway.

Lime Fresh will be open from 11:00 a.m. to 10:00 p.m. Monday through Sunday. No special festivities are planned for the Wednesday opening, but a company rep says a “grand opening fiesta” is being “planned for a date in the near future.”

Lime Fresh opened its first Arlington location, at 2900 Wilson Boulevard in Clarendon, in mid-January. Parent company Ruby Tuesday declined to comment on how the location is faring financially, except to say “are excited about the good community response and continuing expansion in the D.C. area.”

Originally launched in the South Beach neighborhood of Miami Beach, Florida, Lime Fresh describes itself as a “fast-casual Mexican restaurant” that has “garnered a cult following from locals and celebrities alike throughout Miami.”

Diners have the option of choosing from a variety of guacamole flavors served with house-made tortilla chips, including the Classic Guac and the Gringo Guac, as well as the Housemade Queso Dip. Entrée favorites include the South Beach Burrito with chicken, jack and cheddar cheese, pico de gallo and shredded lettuce served on a low-carb tortilla; Flautas with chicken, organic black beans, corn, jack and cheddar cheese lightly fried in golden brown, soft yellow corn tortillas and served with a creamy avocado-ranch dipping sauce; and the Surfer Tacos with grilled Mahi Mahi, shredded cabbage, pico de gallo and a cool cilantro sauce. Low carb, vegetarian and whole wheat options are also available for health-conscious diners.