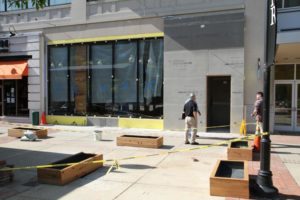 The restaurant, which is currently under construction on Pentagon Row in the old PR Grill space, is expected to open on June 13 after two days of mock service. The company has several locations in the District and Maryland, but this will be the first Nando’s Peri Peri in Virginia. A location is also planned for Old Town Alexandria.

In a press release, the company said it’s planning to expand beyond the D.C. area.

These openings mark the beginning of an East Coast expansion of the flame-grilled Portuguese chicken restaurant, which is close to announcing several new leases.

The first Nando’s Peri Peri opened its doors in 1987 outside of Johannesburg, South Africa. Since then, Nando’s Peri Peri has opened restaurants in 34 countries and five continents. Today, it has over 850 restaurants located around the world. Nando’s Peri Peri made its USA debut in 2008, when it opened its first US location on 7th Street in Washington, DC’s Chinatown.  Since then, Nando’s has gone on to open six additional locations based in and around the Washington, DC Metropolitan area, including Dupont Circle, Silver Spring, Annapolis, Bethesda, Gaithersburg, and the National Harbor.

The Pentagon Row location is currently hiring full-time and part-time cashiers and grillers, the company said.