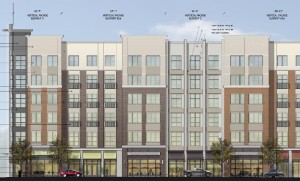 (Updated at 5:55 p.m.) The County Board has given the go-ahead for the redevelopment of the Rosenthal Jeep/Chrysler property on Columbia Pike.

At its meeting yesterday, May 22, the board voted unanimously to approve a rezoning and use permit for the property. The site, located at the southwest corner of Columbia Pike and Glebe Road, will be turned into a multi-family residential complex.

The plan includes construction of a six-story building with 245 apartments, 44 townhouses, 12 stacked flats and retail space on the ground floor. Renderings of the buildings were released in January. The development will be split into two blocks by a new road that has yet to be constructed.

Although the development is based on the Columbia Pike Form-Based Code, it required approval of a special use permit because the property exceeds 40,000 square feet.

“The Form-Based Code is beginning to make a real difference in the look and feel of Columbia Pike,” said Arlington County Board Chair Mary Hynes. “With this, the seventh Form-Based Code project approved by the Board for the Pike, our community’s vision of a revitalized, more vibrant, walkable Pike is becoming reality.”

Efforts will be made to be environmentally sensitive during construction, but the developer will not seek LEED sustainability certification. It was explained that as part of the Form-Based Code guidelines, LEED certification is not required in order to keep construction costs low. Board member Jay Fisette didn’t like that concept.

“I believe that as our standards change we need to simultaneously look at changing the Form-Based Code standards as it applies to that area,” Fisette said.

County staff reached out to residents in the neighborhood during the planning process to get feedback on the site plan. The overall response was positive, according to the county, although some concerns were raised about disruptions due to construction and potentially hazardous traffic patterns. Board members spent time addressing both topics.

As currently designed, residents of the complex won’t be able to make a left on Columbia Pike or Glebe Road. Some worry that problems that could arise from drivers making U-turns in order to go north on Glebe Road or west on Columbia Pike. The Board agreed that further investigation into safety and traffic patterns is necessary, and instructed county staff to tackle the issue.

Of lesser importance is the formal naming of the street that will be constructed through the property. It is supposed to start with an “L” and have two syllables, per county regulations. Some have begun tentatively calling it “Lincoln Street.”

Board member Chris Zimmerman said adhering to naming regulations sometimes seems absurd in an area where streets don’t follow an easy grid design. He suggested not naming the new road Lincoln to avoid confusion with the North Arlington street of the same name. Hynes agreed, but pointed out there’s plenty of time for discussion because the name doesn’t have to be assigned until the street is built.