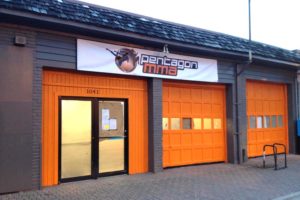 Located in the former Kayak Station space, Pentagon MMA (1041 S. Edgewood Street) will open at 10:00 a.m. on Saturday, June 2. As part of its grand opening celebration, it will be offering free introductory classes from 11:00 a.m. to about 3:30 p.m. on Saturday, including Intro to Muay Thai, Women’s Kickboxing, and Intro to Brazilian Jiu-Jitsu. An open house will be held from 10:00 a.m. to 3:00 p.m. on Sunday.

Pentagon MMA says they will be offering big discounts on memberships during their first weekend. The studio says they “welcome people of all ages, shapes, and sizes” who want to learn self-defense, get in shape, or compete in MMA.

The studio is owned by Vivek Nakarmi, a champion Muay Thai kickboxer who’s also listed on Facebook as a Washington-Lee High School grad.