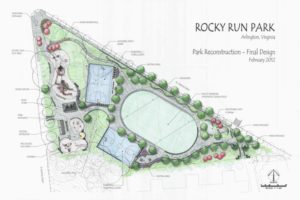 One notable aspect of the plan features an area specifically designed for skateboarders. The lower portion of the park is the area aimed at skaters, where special “sculptures” will be installed. The “skateable art” is meant to be functional for skateboarding, as well as visually appealing for other visitors.

Two basketball courts will sit in the middle of the park; they will be striped both for basketball and other sports like volleyball and futbol sala. The courts will be lit at night, as will the adjacent revamped field. The current stone dust field will be redone with a synthetic turf surface. 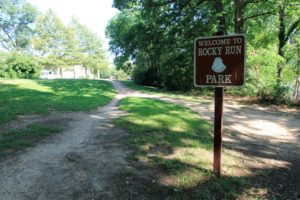 An existing playground for older (5-12 year old) children will be relocated to the upper end of the park along N. Barton Street, to be next to the tot (2-5 year old) playground. Both will receive some new play equipment.

Additional seating and picnic tables will be installed throughout the park, along with new trash cans, recycling containers and bicycle parking. The plans also include increased accessibility with the construction of Americans with Disabilities Act compliant walkways. During the revamp, grading and drainage will be improved, additional landscaping added, and numerous trees will be planted.

County staff started meeting with residents in the area in 2010 to develop the plan. Funding is coming from pay-as-you-go and park bond funds, as well as Neighborhood Conservation Program funding.

A landscape architect with the Department of Parks and Recreation said the construction documents are 90 percent complete and currently under review. Staff members believe the project will go to bid sometime this summer, and construction will begin in the fall.