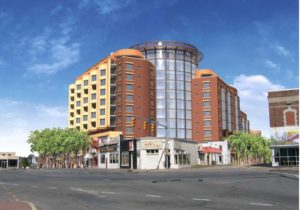 Construction on a new apartment building at 1200 N. Irving Street in Clarendon is expected to begin soon.

Developers ZOM Inc. and USAA Real Estate are planning to begin work on the 187-unit apartment building within the next 30 to 45 days, according to a letter sent to local residents. The developers will be holding a community meeting next Monday, June 11, to discuss the project. The meeting will be held at the Lyon Village Community House (1920 N. Highland Street) at 7:30 p.m.

Representatives from the Lyon Village, Lyon Park, Ashton Heights, Clarendon Courthouse and Ballston-Virginia Square civic associations have all been invited to the meeting, as have local business owners and property owners.

ZOM first bought the site at the corner of Washington Boulevard and N. Irving Street in 2006, but it has remained fallow as the developer struggled to find financing for the project. USAA bought the property in 2011 and is developing it together with ZOM.

The building has been dubbed “The Waverly at Clarendon Station” — though it’s unclear if that name will stick once the project is complete.