Caribbean Breeze in Ballston (4100 Fairfax Drive) is about to undergo a major facelift. From name to food, a lot is going to change during an upcoming renovation and re-branding.

Existing owner Mike Cordero will partner with his son, Nick Cordero, and newcomer Scott Parker for the revamped establishment, which will be called A-Town Bar and Grill. Parker says the new menu will be “eclectic,” and features a wide range of choices including sushi, sandwiches, flatbread pizzas and steaks. The beer list will expand from four to about 10. Food will be served every day, from 11:00 a.m. until 2:00 a.m.

Parker said Caribbean Breeze, which just celebrated its 10 year anniversary last month, has consistently been financially successful. However, the partners believe the broader concept should appeal to more people.

“The goal is to be an American bistro feel with a lot more energy than any of our competitors,” Parker said. 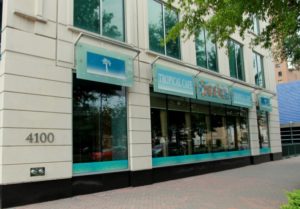 The outdoor patio area will be redone with a better bar and some couches to supplement the regular dining tables, according to Parker. TVs will be installed throughout the restaurant to accommodate sports fans. A-Town is also looking to offer live entertainment, consisting of a few bands, but mostly DJs.

“I’ve recruited a top knotch staff and will be bringing in the best DJs and local talent from around the D.C. area,” said Parker.

The restaurant will have to close for a while during the renovation. Caribbean Breeze will be having a farewell bash all day on Saturday, June 30. Construction on A-Town Bar and Grill will begin on Monday, July 2; it is expected to open by the beginning of August.