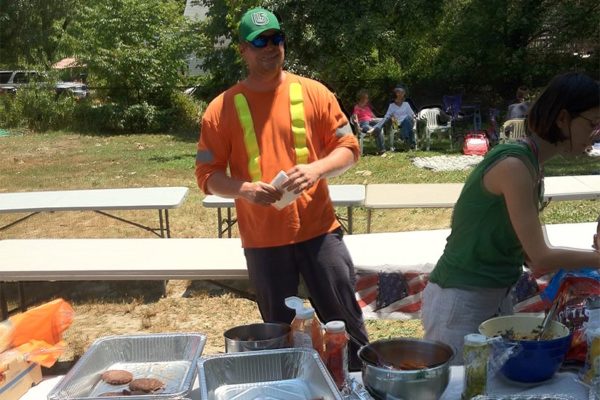 Neighborhood Thanks Power Crews — A few special guests stopped by the Waycroft-Woodlawn Fourth of July picnic yesterday (see photo, above). The neighborhood invited two hard-working power crews from Ontario, Canada to have a quick lunch with them. “The community clapped and cheered to say thanks,” writes resident Jim Pebley. “Was a nice moment after a long hot couple days.”

Hospital Visits Up Last Weekend — The number of patient visits to Virginia Hospital Center were about 30 percent higher than normal last weekend, largely due to heat-related symptoms, especially among the elderly, following Friday’s storms. No heat-related deaths have been reported in Arlington since the storms. [Arlington Mercury]

Tree Destroyed House While Family Was Inside — An Arlington couple and their two young girls were, amazingly, unharmed after a large oak tree came crashing through their house during Friday’s storm. The family was at home at the time. The parents were watching a movie in the basement; they came upstairs to find the girls still sleeping in their beds. [WUSA 9]